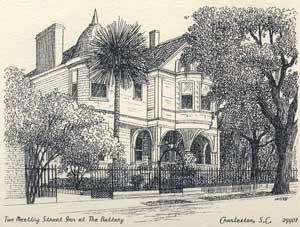 It’s fitting that the romantic Two Meeting Street Inn, the historic Charleston, SC bed and breakfast located at the corner of Meeting Street and South Battery in Charleston’s prestigious South of Broad neighborhood, should also find its beginnings in a most touching story of love.

According to tradition, Waring Carrington, a successful Charleston SC jeweler, experienced love at first sight when he saw young Martha Williams in the late 1800s. The two were married in 1890 in a celebrated society event for which 2500 invitations were sent. Fittingly, the bride’s father, wealthy merchant George Williams, bestowed an incredibly generous wedding gift on the newlyweds.

“…The jewel in the crown of Charleston bed and breakfast hotels.” – Hemisphere Magazine

This gift, presented on a rose colored pillow, was a check for $75,000 to be used by the couple’s to build their new home at the corner of Meeting Street and South Battery, one of the most desirable locations in Charleston, SC. This gift would be generous even by today’s standards but in the depressed post-war South, the loving gesture was truly extraordinary. Little did George Williams know that his gift would one day become the honeymoon destination for future newlyweds seeking a romantic getaway at an exquisite Charleston bed and breakfast.

In 1946, the mansion at 2 Meeting Street was purchased by Minnie Spell Carr, aunt (and great aunt) of the current owners, who established a guesthouse. The Spell family has been welcoming guests to its elegant Charleston home ever since. The guesthouse eventually became Two Meeting Street Inn, now known worldwide as a symbol of the city’s grace, beauty and hospitality. Today the historic Charleston Bed and Breakfast is owned by Mrs. Carr’s youngest nephew Pete Spell’s wife and two daughters.